Tristan Lee shows one of his pieces from New York Fashion Week in 2018.

Diagnosed with sickle cell disease as a 6-month-old, Tristan Lee has faced a lot of challenges over his 37 years of life. But from a young age, he also learned how to turn those trials into triumphs.

At age 9, a stroke due to his disease left him paralyzed on the left side. He had to re-learn how to walk, talk, and use the bathroom.

Lee found the stroke to be both a curse and a blessing. While friends were making fun of him because of his differences, the newfound and unwanted attention led him to pursue acting — which eventually turned him to modeling, designing clothes, and walking the runway. 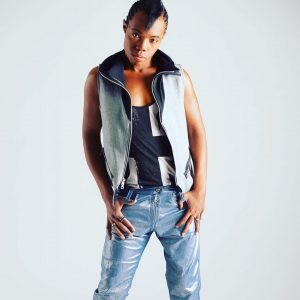 “I know people are looking at me,” Lee said, recalling his social difficulties after leaving the hospital. “So I’m going to give them something to look at.”

A child who was once teased for looking different is now a man recently honored as one of six “patient heroes,” and will represent North America in the Rare Disease Day international campaign led by Eurordis-Rare Diseases Europe.

Lee’s profile, along with those of the five other rare disease heroes in Australia, Malaysia, Brazil, Kenya and Norway, are featured in the Rare Disease Day global campaign.

Rare Disease Day was launched by Eurordis 13 years ago, and has since become a global event bringing greater awareness to rare diseases. It started on Feb. 29, 2008, a rare leap year, and is now celebrated on the last day of February every year.

U.S. participation in Rare Disease Day began in 2009, and more 100 countries were participants last year. This year, because of COVID-19, many events are online only.

“Rare Disease Day is an opportunity to enlighten the public about issues affecting rare disease patients such as overcoming health inequities, including the lack of understanding around rare conditions and challenges patients must face to even get an accurate diagnosis,” Peter L. Saltonstall, president and CEO of the National Organization for Rare Disorders (NORD), said in a statement to BioNews Services, which publishes this website.

Before Lee became the face of sickle cell disease and rare disease in North America, his first starring role was as a 9-year-old Johnny Appleseed in community theater shortly after his stroke.

When he was 14, his mother signed him up with Barbizon modeling school in nearby Harrisburg, Pennsylvania, where he learned the ins and outs of modeling, paying close attention to clothes, design, and sketching.

“During school, when I was supposed to be doing math or something, I daydreamed and just sketched different shirts, pants and just whatever inspired me,” Lee said.

He also dressed impeccably. From middle through high school, all he wore was Tommy Hilfiger, earning him the nickname of Tommy Boy. His other moniker was Divo, instead of the female diva. The name stuck, and it’s now part of his fashion line, DiVo Stars, which raises funds and awareness for sickle cell disease.

He brought five sketches to the fashion design coach Valerie Beggs some seven years ago. In the following months, those five sketches became the basis of a local fashion show and jump-started Lee’s career on the runway, and his advocacy for sickle cell disease. He went on to produce high-quality fashion shows in and around Williamsport, a city known primarily in the U.S. as the site of the Little League World Series. Tristan with his husband, Andrew Schlachter.

Apart from DiVo Stars, Lee continues to model with a disability agency and to act, and is now looking to start with voice-over work. He credits his faith in God and encouragement from two praying grandmothers with getting him through each day, between his busy professional schedule and his unpredictable battle with sickle cell disease, which can strike at any moment.

“I really have to dig into my faith and really trust in God to just take my life and do great things with it,” Lee said. “He just continues to kind of show up and show out for me, and that’s how I make it.”

Originally given a 20-year life expectancy, Lee says he’s outlived it because he’s always been surrounded by knowledgeable doctors. Growing up, his best doctors came in teams of three, a comparison Lee likes to make to the Holy Trinity of Christianity — the Father (God), the Son (Jesus), and the Holy Spirit.

A team of three helped him recover from his stroke as a child. Now his primary care and two specialist physicians are all with Divine Providence Hospital in Williamsport. One doctor in particular, Charles Kofi Agbemabiese, a specialist in hematology and oncology, was instrumental in helping Lee transition from pediatric to adult care.

While the care for sickle cell disease has drastically improved in recent years, no “universal cure” exists, as Lee puts it. The goal, he said, is to make sure babies born with sickle cell are cured right away, and able to be free of this disease for life, an objective that resonates with rare disease communities around the world.

In a NORD interview ahead of Rare Disease Day, Lee said that he is on “borrowed time,” given his diagnosis. He spends as much time as he can with his family when he’s not working his way up in the entertainment industry, sending good morning texts to his mom, and waking up next to his husband of four years, Andrew Schlachter.

“Having a rare disease like sickle cell, and understanding that every moment, every breath counts. I just try to focus and hone in on everybody who’s important to me,” Lee said.

“There might be sometimes where it’s hard and you want to give up, but just don’t. Because the fact that you are living this life and you were chosen to live this life just proves that you are great, and you have greatness inside of you,” Lee said.