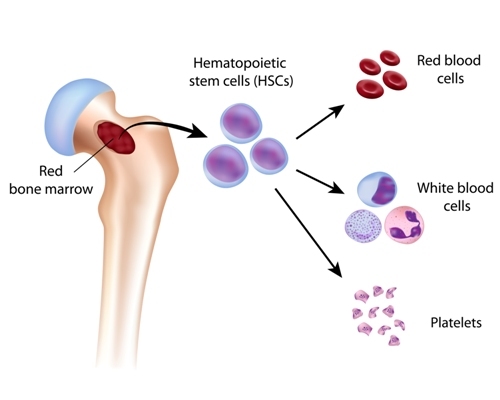 Patients with blood disorders, such as sickle cell anemia, thalassemia, and AIDS rely on bone marrow (blood stem cell) transplantation, as this is currently the only therapy available for these diseases. The procedure, however, requires the removal of the malfunctioning stem cells, which is achieved by submitting patients to chemotherapy and radiation.

Researchers at Harvard Stem Cell Institute (HSCI) developed a novel nontoxic transplantation procedure where specific targeting of the faulty stem cells in mice was achieved with antibodies. The new procedure, researchers reported, is as effective as chemotherapy and radiation, removing more than 98 percent of blood stem cells.

“Instead of using non-targeted drugs that have lots of collateral damage, we thought we could take advantage of the precision of the immune system, in particular, antibodies,” said study lead author David Scadden, M.D., co-director of the Harvard Stem Cell Institute (HSCI), and the Gerald and Darlene Jordan Professor of Medicine at Harvard University, in a press release.

Dr. Rahul Palchaudhuri, a postdoctoral fellow in Scadden’s lab, developed antibodies targeting a protein called CD45. “Antibodies are remarkably specific in what they target. We can direct them to CD45, a cell marker which is exclusively expressed in the blood system. That way we avoid toxicities to non-blood tissues,” he said.

While chemotherapy and radiation affect all cells indiscriminately, the novel method specifically targets the blood cells via CD45-targeting antibodies. Key components of the immune system, including thymus and the bone marrow, which are essential for mounting an effective immune response, are kept unharmed.

Mice with sickle cell anemia had a successful transplant when treated with the antibody method, and were cured of their anemia.

“If this approach works in humans, it will really change the conversation that providers have with patients,” Scadden said, especially for those “who have these underlying genetic disorders and for who the new gene-editing and gene therapy techniques are being developed.”

Scientists are focused on identifying antibodies that may be effective in humans, and a company has already been formed to translate these findings into preclinical settings.

“It brings precision medicine into the area of transplant in a way that hasn’t been there and is needed,” Scadden concluded.